Never ones to let any ill-gotten dollars slip through the cracks...

Foreign providers of red light cameras and speed cameras have pocketed millions in US federal taxpayer bailouts in the wake of the Covid-19 virus scare. Data released by the Small Business Administration and US Treasury indicate that photo ticketing companies, including firms based overseas and embroiled in scandal, collected up to $9 million in subsidies under the Paycheck Protection Program (PPP).

Although technically a" loan", the PPP funding is "forgivable" -- that is, the company does not pay it back -- as long the firm says that 60 percent of the funds were used for payroll and employee levels were maintained during the crisis. (Oh sure... "scout's honor, you have our 'word' on that") .

The biggest bribers out there, Redflex Traffic Systems, based in Melbourne, Australia, collected up to $5 million under the program. That will help the company balance the books, as it has failed to turn a profit since it was caught in 2014 bribing officials in Illinois and Ohio. The chief of US operations for Redflex, its executive vice president, its lobbyist, its contractor and a Chicago city official were all convicted of felonies in the scandal, but the corruption was more widespread. A Redflex official testified that envelopes filled with cash handed to politicians in Arizona, California, Colorado, Florida, Georgia, Illinois, Massachusetts, New Jersey, New Mexico, Ohio, Tennessee, Virginia and Washington to bribe them into supporting automated enforcement.

Safespeed collected as much as $2 million, despite being the target of an ongoing federal corruption probe. Former Illinois state Senate Transportation Committee chairman Martin A. Sandoval admitted he took $250,000 in bribes from Safespeed to become the defender of photo enforcement in the legislature. Patrick J. Doherty, the chief of staff to Cook County Commissioner Jeff Tobolski, bribed local officials on Safespeed's behalf. Chicago consultant William A. Helm was indicted for slipping cash to Sandoval so he would pressure the Illinois Department of Transportation.
“In de taal zit een vrijheid verborgen waar de censor niet bij kan. Al onze schrijvers kennen dat geheim.”
Top

@hikeaz
Wait just a minute....did I read that right? Are you saying that there are corrupt public officials in Cook County Illinois? Hard to believe.

@LosDosSloFolks The Cook County Assessor's office is all good though

Arizona Town Accused Of Illegal Red Light Camera Meeting
A complaint filed Friday with Arizona attorney general Mark Brnovich accused the town of Fountain Hills of violating the state's open meeting law to advance the installation of red light cameras. Several of the town's council members, including the mayor, discussed what it might take to bring cameras into the town, according to records obtained under a freedom of information request. The complaint filed by Arizona Campaign for Liberty Director Shawn Dow cited a 2005 attorney general ruling that stated such contact was not permitted.

"Mayor Dickey -- knowing these cameras were going to cost this town millions in lawsuits -- is willing to break the law to sneak them in while everyone is on lockdown," says Mr. Dow "She is trying to use these cameras to cover her inept budgeting skills -- she lost the tax increase she wanted to push through, so she is trying to punish us with unconstitutional cameras."

Under state law, members of a public body cannot conduct an email exchange involving a "quorum" of members regarding matters that might come before the council. Mayor Ginny Dickey, vice mayor Mike Scharnow, councilman Sherry Leckrone and councilman Dennis Brown emailed comments to one another on the subject in a series of separate emails. Four of the council's seven members constitute a quorum. 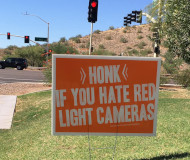 The town council on August 24 will take a final vote approving the use of cameras that tickets people making slow, right-turns on red. US Department of Transportation statistics show that such turns rarely cause accidents. Proponents of right turn cameras say the devices "save lives" of pedestrians and cyclists, but the National Highway Traffic Safety Administration (NHTSA) study concluded otherwise.

"The vast majority of fatalities [for cyclists and pedestrians] did not occur at or near intersections," the report explained. (But the MONEY is at intersections)

An average motorist could drive a billion miles -- the distance from Earth to Jupiter and back -- before being involved in an accident that resulted from a motorist making a rolling stop on a right-hand turn. A rolling right turn study in California came to the same conclusion .
“In de taal zit een vrijheid verborgen waar de censor niet bij kan. Al onze schrijvers kennen dat geheim.”
Top

The current mayor of Crestwood, Illinois, will be arraigned Thursday (8/13/20) on felony corruption charges related to his relationship with a red light camera company. According to the indictment unsealed Friday, Louis Presta faces up to eight years in prison if convicted of bribery, lying to federal agents and filing a bogus tax return.
US Attorney John R. Lausch Jr said that when the Federal Bureau of Investigation interviewed Presta about the allegations, the mayor denied taking cash, gifts and campaign contributions from Safespeed, the photo ticketing vendor. The FBI then confronted Presta with video of him accepting an envelope filled with $5000 in cash on March 7, 2018. Presta claimed the envelope was actually empty. (Ha-ha; really?)
In 2016, a Crestwood village news release "welcomed red light cameras" that Safespeed installed and operated. The devices were installed "after careful consideration and detailed analysis," the release claimed. The village's own insurance company, Catlin Indemnity, understood otherwise. In 2017, it refused to cover the massive legal bills that were accumulating from a challenge to the controversial way Safespeed has been issuing automated tickets to vehicles making right hand turns at the intersection of Cicero Avenue and Cal Sag Road.
Thanks to the bribes, Presta made "substantially more" than the $97,566 that he declared on his calendar year 2018 tax return. ('Empty' envelope notwhithstanding)
“In de taal zit een vrijheid verborgen waar de censor niet bij kan. Al onze schrijvers kennen dat geheim.”
Top
Post Reply
426 posts